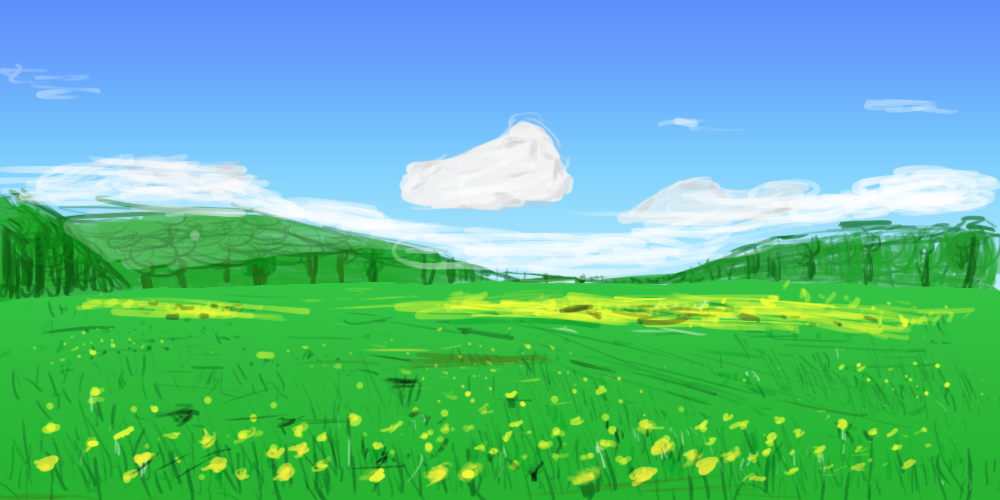 Wow, I constantly forgot the joys and the pains of drawing. It is something that is exciting and depressing at the same time. A picture, imagined to be life-like, drawn for abstraction, but eventually finished as an painting in-between the real and the abstract.

It is always fun to begin a piece, to imagine in front of me, not a empty white canvas, but a sprawling stunning scene, filled with intricate brush strokes and life-like texture, a true ‘photo’ that captures everyone’s eyes and feelings. As the time passes, the picture I imagine still has yet to come to life. On my screen, I just see a small portion of the gigantic canvas filled, a seemingly disproportionate fraction for the time I had now invested. I feel agitated that nothing is getting done, as if I had been daydreaming instead of working. Then comes the critic inside of me, demanding as always, filing complaints of my mediocre drawing, constantly noting its disappointment, pressing me to erase and give that flower another try. Yet no matter how hard I try, it doesn’t have that real-life texture. The picture seems primitive, unsophisticated, careless, a child’s drawing. But I plow forward, slower and slower. After some time, after another laborious change to a small portion of the drawing, drawing then erasing multiple times, I give up and zoom out to see the big piece. I sigh, take a deep breath and begin to quickly finish the piece, hastily patching the empty portions of the canvas into a boring blue hue, ignoring the countless mistakes that I might have erased, just trying to get the piece done.

I stop and put my stylus down and look again. At last my painting looks complete, it looks… actually not terrible. The blue sky puts everything into place, a keystone. I feel accomplished, excited, and most of all, relieved that I didn’t just waste an hour doing nothing. A feel a wave of happiness engulf me, small yet powerful, something that keeps me going through life.

An attempt of this picture without the houses (I would’ve put them in, but I lost my focus :| )

Friends are not Uber drivers: Don’t be the one sitting in the back all alone.