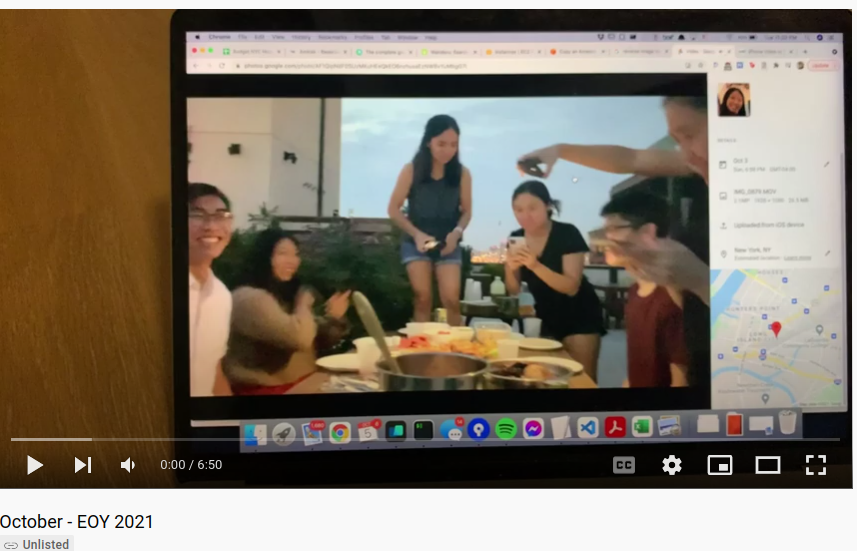 From photos to video diaries: how I remember the past

One challenging question I’ve always had was how to remember the past. I know that my memory isn’t the best, and when my friends and I reminisce about the good ol’ days, our accounts begin to differ. Who knows what another few years will make of our memories? We include people in stories before we even met them and recall words never said. Or maybe I just forgot about it. Tough.

I’ve tried to keep a diary of my life, and I’ve taken photos from time to time. But even then, they are just a tiny slice of my life. Stories take a while to jot down, and by the time I had figured out how to write about an event, the feeling of the event — the novelty and excitement — escapes me. It is a slurry of disconnected sentences, the narrative dry and lacking truth. After the failure of written words to capture my memories, I moved to pictures and focused on taking snapshots of the world around me. I took pictures not of people but of the things I saw. I once took 80 pictures of different plants in the botanical garden, including the corresponding descriptions on the ground. Looking back, I took pictures of the wrong things. Even photos of people I took looked scripted. Usually, it’ll be my family, huddled together, smiling in front of the camera. But I still felt like I was missing something — the “in” of the moment. It was hard to pin down why. But once Apple released their live photos, I realized that the problem was the lack of “motion.”

My dive into audio and video

By this time, I had started college and was intrigued by the one second a day. It had a bit of motion, wasn’t as awkward to take, and felt like a natural solution to my problems. The clips I took weren’t scripted or faked. But I soon began to see the cracks in the idea. I took terrible clips. There was a lot of shaking and frantic panning as I tried and fit the entire scene into the frame. Although watching one clip at a time was bearable, watching the videos in sequence gave me nausea, and I could barely stay focused when creating a collage.

Also, when my phone was playing music, I felt even more awkward taking a video and essentially pausing the music for a bit. Many events were never recorded and might have been lost in my mind forever.

The benefits of long-form video

Thus began my attempt at overcoming my awkwardness and taking longer videos. I began to realize the benefits of doing that. Because of the extra time, I no longer had to pan quickly around the table and began feeling content with pausing between camera motions. When I look at the videos I’ve made now, I can get back into the moment.

It has also made me appreciate the skill filmmakers need to make a movie feel like there’s a lot of action without making people sick. If you watch well-produced films, the camera rarely pans left and right.

I only started taking longer videos during my junior year of college. Since then, it’s been a fun activity to piece together the different videos I took and make a music video at the end of each semester. It is both a creative outlet for me and an opportunity to recollect my memories and relive the fun times in my life with the people. I began to remember events that I had already forgotten.

On a quiet weekend, I’ll watch the videos I took over the years. It’s a great reminder of how lucky I was to spend time with all those different people and an opportunity to rekindle an old friendship.